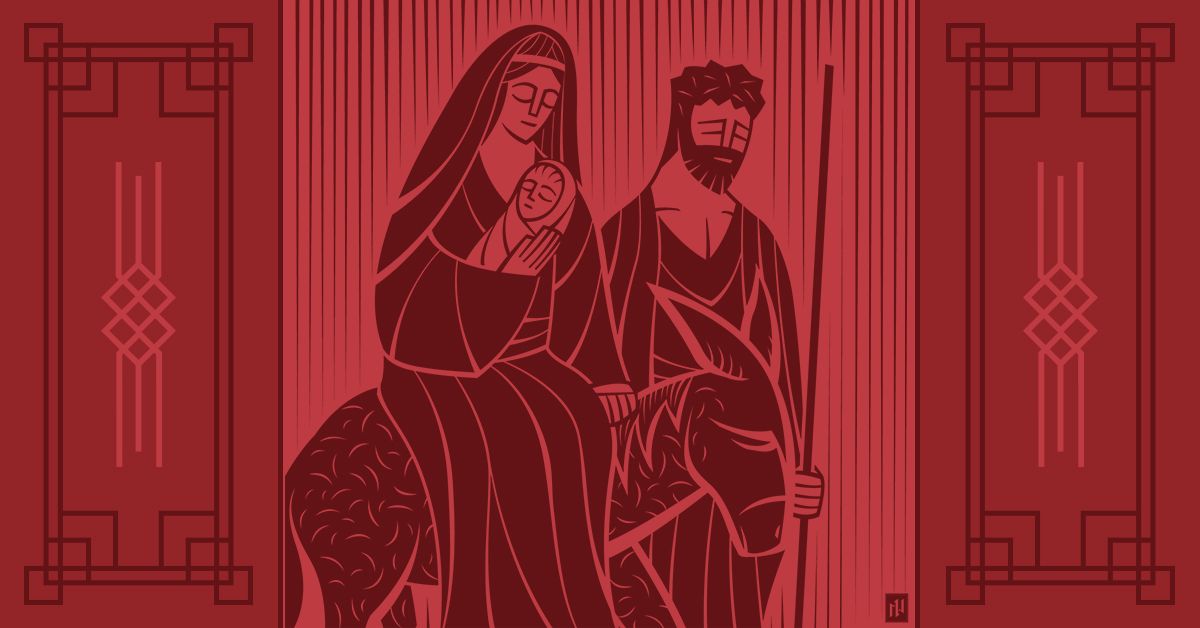 ¹³ Now when they had departed, behold, an angel of the Lord appeared to Joseph in a dream and said, “Rise, take the child and his mother, and flee to Egypt, and remain there until I tell you, for Herod is about to search for the child, to destroy him.” ¹⁴ And he rose and took the child and his mother by night and departed to Egypt ¹⁵ and remained there until the death of Herod. This was to fulfill what the Lord had spoken by the prophet, “Out of Egypt I called my son.”

¹⁶ Then Herod, when he saw that he had been tricked by the wise men, became furious, and he sent and killed all the male children in Bethlehem and in all that region who were two years old or under, according to the time that he had ascertained from the wise men. ¹⁷ Then was fulfilled what was spoken by the prophet Jeremiah:

¹⁸ “A voice was heard in Ramah,
weeping and loud lamentation,
Rachel weeping for her children;
she refused to be comforted, because they are no more.”

¹⁹ But when Herod died, behold, an angel of the Lord appeared in a dream to Joseph in Egypt, ²⁰ saying, “Rise, take the child and his mother and go to the land of Israel, for those who sought the child's life are dead.” ²¹ And he rose and took the child and his mother and went to the land of Israel. ²² But when he heard that Archelaus was reigning over Judea in place of his father Herod, he was afraid to go there, and being warned in a dream he withdrew to the district of Galilee. ²³ And he went and lived in a city called Nazareth, so that what was spoken by the prophets might be fulfilled, that he would be called a Nazarene.

If you're looking for a G-rated bedtime story, you should probably avoid the Nativity and stick to something more saccharine like Frosty the Snowman. Real life isn’t G-rated and neither is the real-life salvation of the world. The Nativity is about rescue and deliverance, which means conflict with real evil. This is a recurring theme in the Bible and our lives: When God acts to rescue—though none can thwart his plan—the powers of evil thrash and fight, unwilling to relinquish their rebellious grip. The Nativity has more in common with the Exodus than the Polar Express—saccharine is overrated.

Three times we read of the fulfillment of God's Word spoken by the prophets. But what does fulfillment mean? Looking up these prophecies might cause you to scratch your head and wonder. Perhaps prophetic fulfillment is at times more poetic than we have ears for. Listen closely—do you hear echoes of God's great deliverances? A dreaming Joseph. A cruel king that massacres children. Egypt. Hints of exile and return. But something greater than the Exodus is here.

Here, Jesus is the climax of Israel’s story as he re-enacts the life of Israel. For instance, Jesus fulfills Hosea 11:1: "When Israel was a child, I loved him, and out of Egypt I called my son.” Jesus is the True Son and True Israel—a light to the nations (Isaiah 42:6). Like Israel, Jesus is rescued from a king so desperate to protect his reign that he murders a generation of baby boys.

The Exodus that Jesus brings is what the original Exodus was pointing to all along—deliverance from our greatest slavemasters: Sin and Death. To know this deliverance is to be united to Jesus—to be “in Christ.” And though Jesus was spared the violence of Herod, he was not spared the cross. Jesus accomplished your Exodus by submitting to the violence of the cross where he bore your sin and delivered you from the burden of its slavery—where he tore down the powers of evil by being torn himself.

In this Advent season, we praise you, the True Son, the True Israel, the light to the nations!
You waged war against darkness on our behalf. You parted the seas of death and bring us into the promised land. But before you could deliver us, you had to be born.

Lord, in our narrow-mindedness, help us embrace a gritty Christmas story that intrudes on our visions of Rudolph and gingerbread. Not a sappy and docile story, but one of powerful transformation and rescue.

Teach us a new way to celebrate: rooted in your rescue, redemption, and restoration.

We know that honoring you in this season, while joyful, is a sober undertaking. For amidst the wreaths, the caroling, and the anticipation of snow, this stands as paramount: to celebrate the coming of the reigning King is to plant our flag firmly against Satan, sin, and death. Lord, to prepare you room in our hearts and home is a battle cry. To celebrate Christmas is to herald you as our deliverer who has defeated our enemies and paid our ransom.

Christ, grant us a most intimate awareness of the task at hand: to party well with joyful hearts full of victory and eyes fixed on eternity. In this Advent season and every day until the glad hour when you call us home.

Advent
Christmas
The Gospel of Matthew