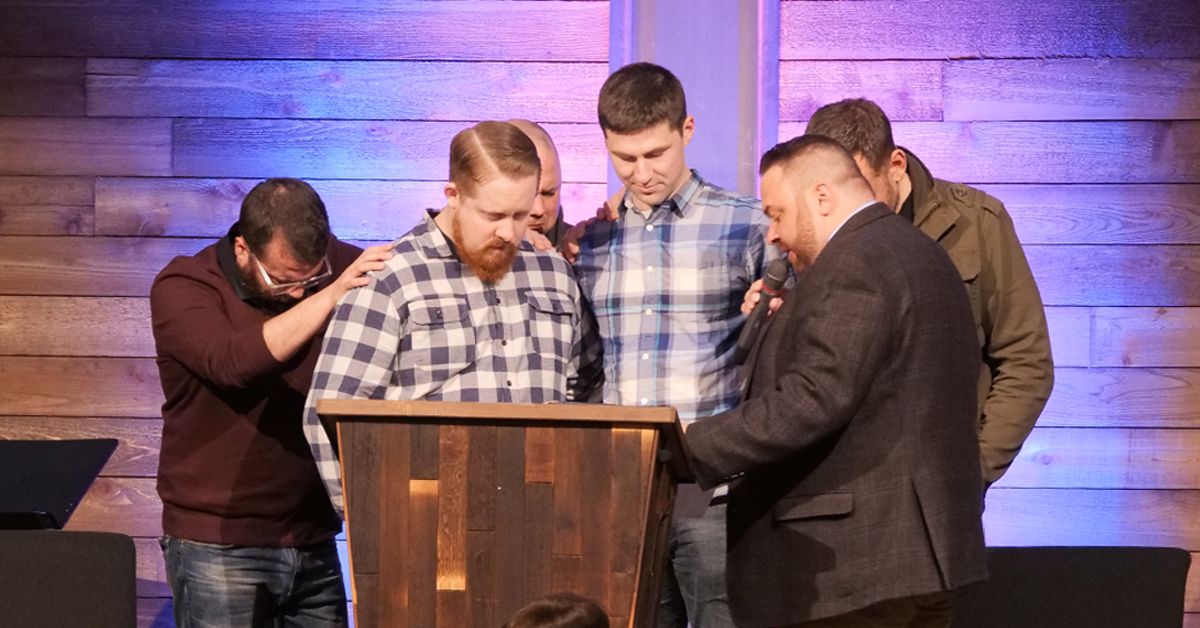 “So I exhort the elders among you, as a fellow elder and a witness of the sufferings of Christ, as well as a partaker in the glory that is going to be revealed: shepherd the flock of God that is among you, exercising oversight, not under compulsion, but willingly, as God would have you; not for shameful gain, but eagerly; not domineering over those in your charge, but being examples to the flock. And when the chief Shepherd appears, you will receive the unfading crown of glory.” (1 Peter 5:1-4)

On Sunday, January 26th, the Coram Deo family had the joy of officially confirming Aaron Kuhns and Ryan James as elders ordained for ministry at Coram Deo Church.

At Coram Deo, we often use the terms elder and pastor interchangeably. As outlined in Scripture, the office of elder is also referred to as bishop, overseer, and pastor. Their responsibilities and qualifications are outlined clearly in the Bible and as in all things, the Church ought to seek to be faithful to God and His Word, asking “what do the scriptures say?”

As the Apostle Paul instructs in letters to both Timothy and Titus, the qualifications of a pastor/elder are:

Paul goes on to tell Timothy that aspiring to the office of an overseer is a noble task. (1 Timothy 3:1) In our current age, it can be tempting to simply find and appoint dynamic speakers and leaders into the role of pastor. A successful businessman or entrepreneur may end up as a candidate to lead a church, as they were successful in leading their businesses. As God’s people, we must let His Word define for us his design and intentions for his church, as the office of overseer is indeed a noble task.

Both Pastor Aaron and Pastor Ryan are a great gift and blessing to Coram Deo. By God's grace, may He use their presence, giftings, and care to strengthen the faith of His people at Coram Deo for many years to come. Please join me in praising God for the work He is doing in our church and also in praying for our pastors and the ministry of the Word of God as we gather for worship this Sunday.

In 2008, I was getting ready for our wedding, moving back to Bremerton from Seattle, and was looking for a new church. The week before we got married, my wife Lacey and I tried Coram Deo and felt right at home. We've been attending Coram Deo ever since. We now have four wonderful kids: Easton (8), Eli (7), Eleanor (5), and Everett (6 months).

I started work at Puget Sound Naval Shipyard in 2007 as a Health Physicist. My primary duty is ensuring that the Navy complies with a specific set of state and federal environmental laws. I enjoy my job, but more than that, I love the people I work with.

A few years ago, I started to feel the call to ministry. I was coaching life group leaders, leading a men's Bible study, teaching in the children's ministry, and participating in a life group, lunchtime Bible study, and morning prayer group. And yet, I still felt like there was something more. I sat down with some of the elders and asked for help in figuring out what this meant. After many conversations, it became clear that God had given me a desire to "shepherd the flock" with an emphasis on counseling. I began meeting with Derrek Busha, took formal counseling training with my wife, and started helping with the pre-marital counseling ministry. As I got more involved, I knew that I wanted to bring hope and healing to those who are broken and suffering in our church.

Being ordained as an elder was humbling and amazing. It truly is a "serious joy" to serve our church. Please pray with me that more lives would be changed at Coram Deo through the ministry of the Gospel from the pulpit and in counseling.

I began attending Coram Deo in 2007 when I came on staff as the Music Director. Pastor Jon, Pastor Brandon and I had been friends for many years before that having done youth ministry together and when I graduated from college, the elders offered me a job overseeing Coram Deo's worship.

I’ve long felt the call to ministry and my road to eldership has been in process in various forms for many years but it was jumpstarted a little over a year ago. In the early fall of 2018, Brynn asked me a very pointed question: “Why aren’t you a pastor yet?” I gave some sort of answer about how it’s a role that requires a lot of time and that while I aspire to the office of elder, my life was a little too busy to do it well. Between a 45+ hour a week job at a marketing agency, working part-time for Coram Deo, and hustling to pick up freelance graphic design gigs on the side, I didn’t feel like I could devote the time that being an elder deserves.

Her response was gracious but direct. “No one ever has enough time. If God has called you to do it, (and I think He has), then you should do it.” Convicted, I began a discussion with the elders that ultimately lead me here — ordination to ministry at Coram Deo Church.

Additionally, shortly after my official nomination, God opened up an unexpected door and made it clear that my role should be more than a part-time employee or lay elder. In April of 2019, I came on full-time staff overseeing worship and all communications within the church.

I am thankful to be one of your pastors and I pray that God grants me many years of faithful service to Him and to the Coram Deo family.

Pastor Brandon leads Coram Deo's operations, community, and kids ministries. He and his wife live in Bremerton. He loves woodworking and spending time with friends and family.