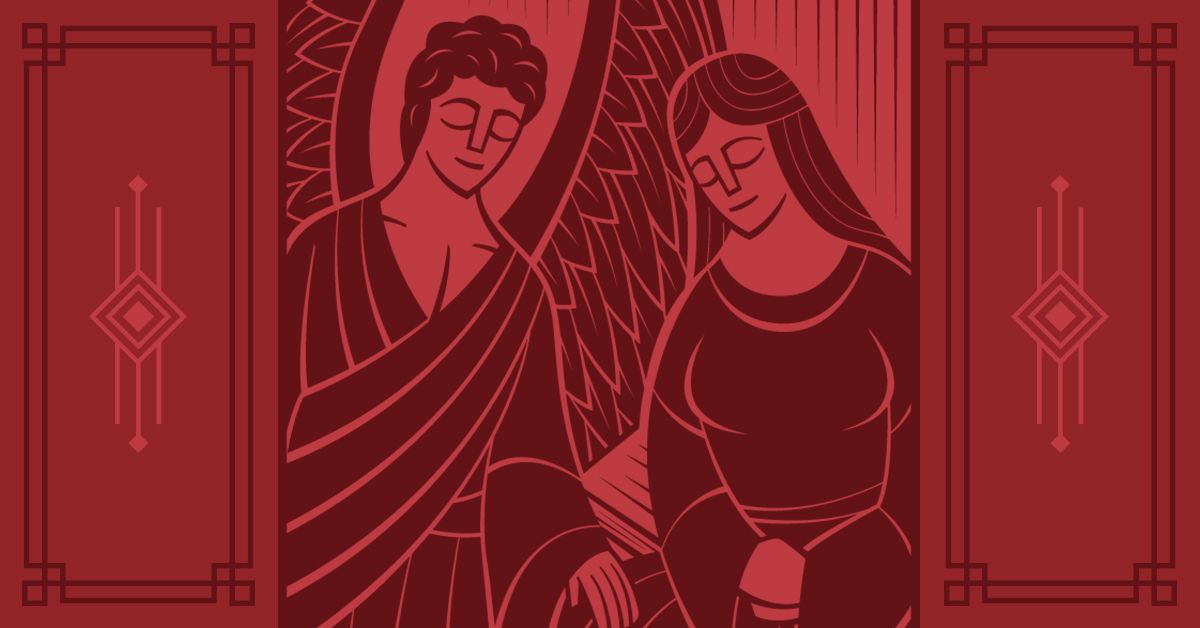 ²⁶ In the sixth month the angel Gabriel was sent from God to a city of Galilee named Nazareth, ²⁷ to a virgin betrothed to a man whose name was Joseph, of the house of David. And the virgin's name was Mary. ²⁸ And he came to her and said, “Greetings, O favored one, the Lord is with you!” ²⁹ But she was greatly troubled at the saying, and tried to discern what sort of greeting this might be. ³⁰ And the angel said to her, “Do not be afraid, Mary, for you have found favor with God. ³¹ And behold, you will conceive in your womb and bear a son, and you shall call his name Jesus. ³² He will be great and will be called the Son of the Most High. And the Lord God will give to him the throne of his father David, ³³ and he will reign over the house of Jacob forever, and of his kingdom there will be no end.”

³⁴ And Mary said to the angel, “How will this be, since I am a virgin?”

³⁵ And the angel answered her, “The Holy Spirit will come upon you, and the power of the Most High will overshadow you; therefore the child to be born will be called holy—the Son of God. ³⁶ And behold, your relative Elizabeth in her old age has also conceived a son, and this is the sixth month with her who was called barren. ³⁷ For nothing will be impossible with God.” ³⁸ And Mary said, “Behold, I am the servant of the Lord; let it be to me according to your word.” And the angel departed from her.

Oh, that we might all have Mary’s faith! The picture of surrendered devotion, Mary has been an inspiration to countless Christians for two thousand years.

Luke clearly loves the faith of this young woman. Still, while many have romanticized her faith, Luke does not fail to include something significant: initially, she was troubled. As humbled (or reluctant) as Mary might have been to admit it, Luke knows that Gabriel’s greeting greatly troubled and even scared her. Like Zechariah not too long before, she had to be reminded not to fear. So how did she get from greatly troubled by the angel’s words to fully surrendered to them?

Her faith was encouraged.

Gabriel is interesting. He stands in the presence of God. He is sent with good news to God’s servants. He seems to be quite joyful, yet sternly expects to be believed, because he speaks the words God sends him to speak—words that will be fulfilled.

The angel referred to promises and names throughout their conversation. Everything he said to Mary was loaded with meaning from the Old Testament Scriptures. The virgin birth. The throne of David. The everlasting kingdom. “Isaiah spoke of these things, remember?” he seemed to imply. God is a keeper of promises. And unlike our promises, his are accompanied by matchless power.

As we read about Mary’s encounter with Gabriel, we are reminded of Zechariah’s encounter earlier. When presented with God’s promise of a son, Zechariah asked, “How shall I know?” He was struck mute because of his unbelief. The world cries, “Barren! Hopeless! Impossible!” But God says, “It WILL be.” Mary was blessed because she believed that God would fulfill what he promised.

Encouraged, filled with faith in the One who is faithful, Mary could move forward with the confidence to say, “Behold, I am the Lord’s servant. Let it be to me according to your word.”

We gather in reverence to exalt you, O Faithful One, the Keeper of Promises. Your sovereignty and might are boundless!

We must confess and repent of our shameful unbelief. We know you to be a promise-fulfiller and yet we live fearfully as if we are sustained by our own strength. Lord, grant us forgiveness for the ways we fail to be faithful.

Instill in us a deeply rooted sense of wonder. Let us marvel at the endless possibilities that an infinite God might offer—for nothing is impossible for you! Who are we not to bow down to a God such as this?

Remind us, like Zechariah and Mary before us, not to fear.

In the quiet, mundane, everyday tasks of life that nobody is watching: give us the fortitude to be faithful.

In longsuffering and hardship: give us the endurance to be faithful.

When our children’s eyes are upon us: strengthen us to be faithful.

When the world is watching, their critiques at the ready, waiting to pounce: give us the courage to be faithful.

Lord, we humbly beg of you: give us the faith to lift our hoarse and shaky voices and say, “Behold, I am the Lord’s servant. Let it be to me according to your word.”

Advent
Christmas
The Gospel of Luke